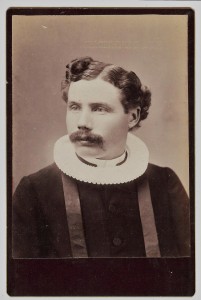 A Mission and Ministry Begin 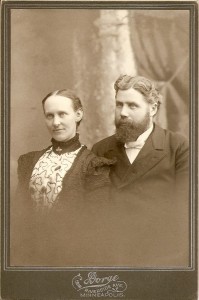 In 1891, Reverend Ingebrit Tollefson and other leaders of the First Lutheran Church (Fordefjord Congregation, at that time, a member of the United Norwegian Lutheran Church) saw the need for an orphanage in the region. Inspired in part by their church's association with the West Coast Lutheran School and Charity Association, Reverend Tollefson, church members and the community built a home to care for 20 children in Poulsbo.  The establishment of this orphanage marks the official beginnings of Martha & Mary. 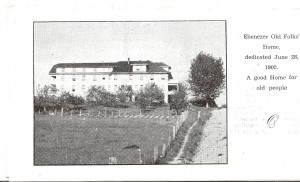 Poulsbo was a growing town in the early years of the 20th century.  An "old folks" home opened in 1909 as a board and care place named Ebenezer.  The three-story wood-framed building overlooked Liberty Bay, originally called Dogfish Bay.

A New Focus at the Orphanage 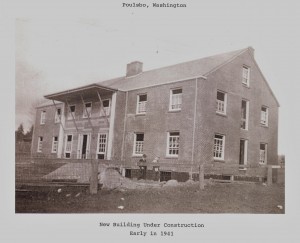 During World War II, the original wood frame building was torn down, and a three story brick building was constructed in its place.  During the late 1940s, the Home become a facility for "disturbed" boys.  As these types of behavior problems increased in severity, obtaining properly trained and qualified staff became very difficult. 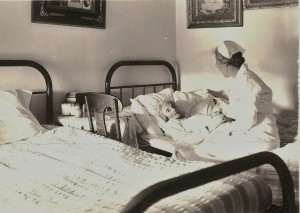 In 1953, the leadership determined that the organization could best serve community needs by offering nursing care for the elderly.  So the "orphanage, then high school, then home for disturbed boys" was closed.  The brick building began a transition to become the Martha & Mary Nursing Home.  A new wing was added to increase the number of beds, and the facility continued to expand over the years as community needs grew.

Ebenezer closes ... to Open Again with a New Service 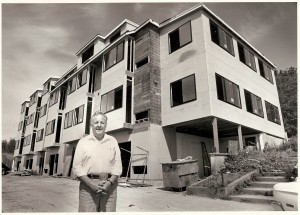 In 1980, after decades of service, the Ebenezer "board and care" closed.  Total renovation of the building was undertaken in 1984. It reopened in 1985 as Ebenezer Residential Center with apartments for residents age 62 and older. 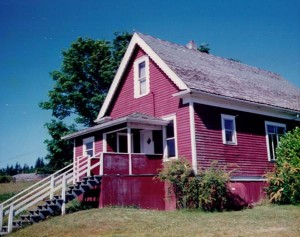 In 1983, Martha & Mary again returned to caring for children, and employees were offered child care in a little red building on the grounds of the Nursing Home.  Six children attended the first day.  Enrollment soon grew to its capacity of 15 children, ages four weeks through 11 years. 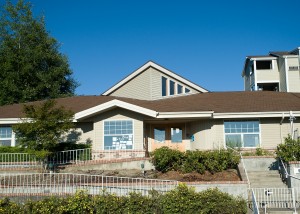 In response to the community need for high quality child care, Trustees voted to design and build a new child care facility on Iverson and expand services to community families.  Child care assistance became available to low income parents when the facility was licensed to accept children referred by Department of Social and Health Services (DSHS).  The enrollment grew to 69 children.

A "Face-lift" for Martha & Mary 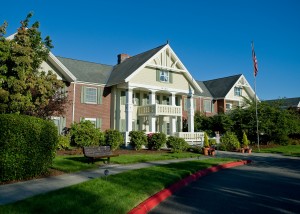 1995 brought a major expansion and renovation to the Martha & Mary Nursing Home.  The building incorporated the Scandinavian culture of Poulsbo into the architectural design and detail.  The nursing home name was changed to Martha & Mary Health Services, more fully mirroring the many new services available to the community.  New look!   New name!  New services!

The renovation of Martha & Mary Nursing Home had a major impact on the structure of Martha & Mary: the one corporation was divided into four.  Martha & Mary Lutheran Services became the "parent" corporation of three active subsidiary corporations which, through their services, meet the mission of Lutheran Services.  This division was required by the financing policies of U.S. Department of Housing and Urban Development (HUD), the federal housing agency which provided funding at the time of the major renovation. 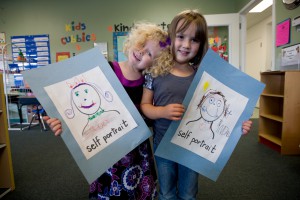 The annex, now called the Children's Learning Center, was purchased and renovated at the same time that KIDS partnered with Kitsap Community Resources to offer Head Start classes.  Before and after school care expanded to include children from two elementary schools.  The opening of this building added 70 children to the enrollment, bringing the total licensed capacity to nearly 175 children from ages 4 through 11 years.

Before and After School Programs Begin

In January 2001, Martha and Mary began offering before and after school programs at seven North Kitsap School District elementary schools.  This program was available during school breaks. 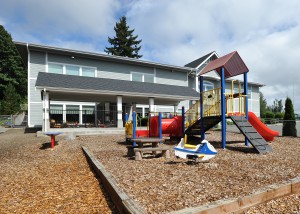 After spending over a year in a portable building, the Silverdale Head Start program moved into a brand new facility in November, built to accommodate 110 infants, toddlers and preschoolers.  Before and after school care was offered for neighborhood elementary school children.  Over 100 children enrolled in this facility, bringing the total number of children served in eight sites throughout Kitsap County to approximately 650.  KIDS enrolled more families eligible for child care assistance than any other provider in Kitsap County, receiving DSHS reimbursement for more than 170 children each month. 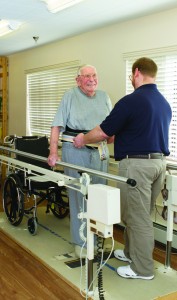 Changes in how health care is provided resulted in Health Services "growing" its rehabilitation services for those who require short-term stays.  Our health center chose a new name, "Martha & Mary Health and Rehab Center" so more people would know about the rehab services that Martha & Mary offers.

"Bridging generations, enriching lives" was introduced as the new motto for Martha & Mary. 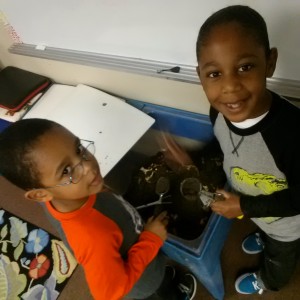 Two Central Kitsap elementary schools contracted with KIDS to provide after school programs.  This addition brings the total number of children served throughout Kitsap County to close to 1,000, making it nationally the largest KIDS program associated with eldercare.

Balloons greeted guests at the Children's Care Center for the 25th Anniversary Celebration.  From the humble beginnings of six children in a little red building to close to 1,000 children in three Martha & Mary KIDS facilities and nine elementary schools in 2008, that's a reason to celebrate!

Recognizing that the number of seniors who want to stay in their own homes was increasing, Martha & Mary took steps to add "in home care" to our family of services. By acquiring existing and viable home care agencies, the acquisition positioned us to serve seniors at home.  The home care company is part of the Martha & Mary Home and Community Services, formerly known as Simeon Services, which has not been active since its inception 25+ years ago.  Martha & Mary AT HOME began in early 2010, and other community services soon followed.

An additional home care agency in our community was acquired and assimilated by the Marta & Mary AT HOME program, increasing our services to more seniors and families in the Kitsap peninsula. 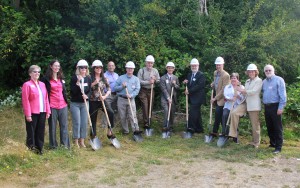 A joint venture was undertaken with Shelter Resources, Inc., Bellevue, WA for development and construction of a new 35-unit affordable senior housing project for the Kingston community, which broke ground in 2012.

Martha & Mary assumed management at Bay Vista Commons in June 2012.  Bay Vista Commons is a 72-unit Assisted Living facility owned by the Bremerton Housing Authority, and the campus is located in Bremerton.  This campus offers value for memory care and assisted living residents with its unique mission of offering services to both private pay residents and Medicaid eligible residents. 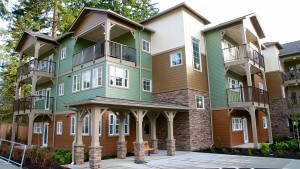 In November 2013, more than 300 people attended the Grand Opening Celebration for the Martha & Mary Village Green Senior Apartments in Kingston.  The 35-unit complex features one and two-bedroom independent living apartments for low and moderate income seniors. Kitsap County Commissioner Rob Gelder, who was instrumental in the project's planning and implementation, spoke at the ground breaking about the synergy and collaboration that this project represents saying it is a real tribute to the way the community and the county have come together.  Representative Sherry Appleton, 23rd Legislative District, heaped praise on the people and organizations who have worked so long to create these opportunities for Kingston, and Senator Christine Rolfes, reminded all present of the important community needs that this project meets. 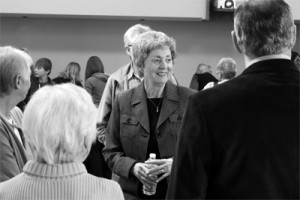 Through her work and dedication to excellence, Joanna Carlson, Administrator of Martha & Mary KIDS, shaped the lives of thousands of local children for more than 30 years.  Although she retired in January 2013, her legacy of giving kids a great start in life continues. Tammi Palodichuk, the new administrator of Martha & Mary KIDS, worked with Carlson for 12 years.  Tammi credits Joanna with teaching her the importance of staff training and the critical role it plays in providing excellent care to local kids. 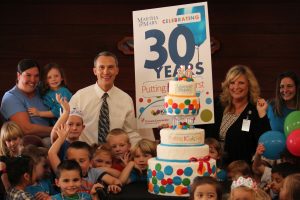